Okay, so you want to make volumetric fog. Volumetric fog has descended from its days largely as a gimmick to being situationally useful, and there are still some difficulties: It's really difficult to model changes in the light inside the fog. There are techniques you can use for volumetric shadows within the fog, like rendering the depths of the front and back sides of non-overlapping volumes into a pair of accumulation textures, and using the difference between the two to determine the amount of distance penetrated.

Let's focus on a simpler implementation though: Planar, infinite, and with a linear transitional region. A transitional region is nice because it means the fog appears to gradually taper off instead of being conspicuously contained entirely below a flat plane.

In practice, there is one primary factor that needs to be determined: The amount of fog penetrated by the line from the viewpoint to the surface. In determining that, the transitional layer and the surface layer actually need to be calculated separately: 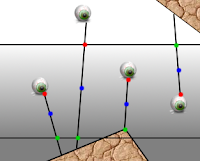 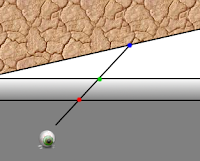 Since the camera being inside or outside the fog is completely determinable in advance, you can easily make permutations based on it and skip a branch in the shader. With a deferred renderer, you can use depth information and the fog plane to determine all of the distances. With a forward renderer, most of the distance factors interpolate linearly, allowing you to do some clamps and divides entirely in the shader.

Regardless of which you use, once you have the complete distance traveled, the most physically accurate determination of the amount still visible as:

You don't have to use e as the base though: Using 2 is a bit faster, and you can rescale the density coefficient to achieve any behavior you could have attained with using e.


As usual, the shader code spoilers:

Posted by OneEightHundred at 11:02 AM No comments:

I don't think I need to extoll the virtues of self-shadowing textures, so instead, I'll simply present a method for doing them:

Anyway, the method for precomputing this should be pretty obvious: Fire traces from each sample and finding the shallowest angle that will clear all heightmap samples. Once you have it, it's simply a matter of encoding it, which can be easily done using Fourier series. Each Fourier band requires 2 coefficients, except the first which requires one since the sine band is zero. I use 5 coefficients (stored as an RGBA8 and A8), but 3 works acceptably. More coefficients requires more storage, but produces sharper shadows.

Fourier series are really straightforward, but here are the usual Cartesian coordinate spoilers:

The constant band squared integrates to 1 over a circle, but all other bands integrate to 0.5. That means you need to double whatever you get from it to reproduce the original waveform.

There's one other problem, which is that the horizon will move rapidly at shallow angles, right where precision breaks down. You need more precision at low values, and my recommended way of doing that is storing the sign-preserving square root of the original value, and multiplying the stored value by the absolute value of itself in the shader.

For added effect, rather than simply doing a comparison of the light angle to the horizon level, you can take the difference of the two, multiply it by some constant, and saturate. This will produce a softer shadow edge.

Shader code to decode this, taking a texture coordinate and a tangent-space lighting direction to the light souce:

An additional optimization would be to exploit the fact that the range of the coefficients other than the constant band is not -1..1, but rather, -2/pi..2/pi. Expanding this to -1..1 gives you a good deal of additional precision.
Posted by OneEightHundred at 11:10 PM No comments: